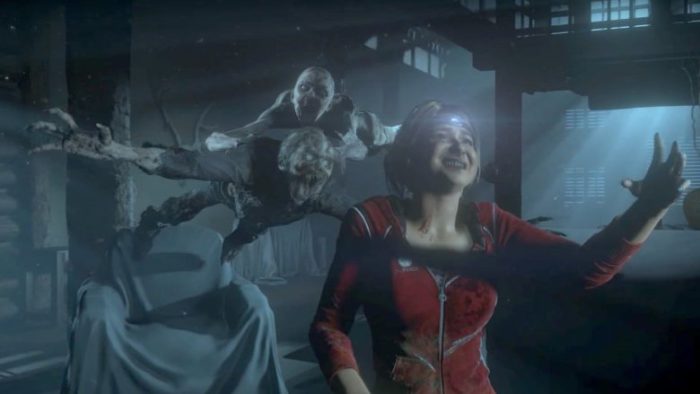 Video Games may be the best medium for horror games. The interactive medium means that each scare involves you more than film or novels will.

Regardless, these games are forgotten gems that everyone who loves horror should check out to get some unique scares.

Even the tensest of horror games usually allow you to fight your way out of a situation. Haunting Ground does not.

You play as Fionna Belli, a college student dragged to a remote European castle after a crash. She is no match for her assailants and has to run away from them.

Fortunately for her, she has her loyal dog Hewie at her side to help fend off the monsters attacking her, as well as with numerous puzzles.

While most horror games have you facing numerous enemies, you only have four enemies who chase you throughout the game, making it feel more like a slasher movie than a zombie flick.

Rather than fighting the enemies, you run from them, until the ending boss fights which play out like a hybrid between a boss fight and a puzzle.

The game is a late PS2 game, and it pushes the abilities of the console, and the game brings an atmospheric gothic castle to life.

With your pet Hewie, you even get some pet simulator elements. You can feed, pet, and train him, and how well you are to him affects your ending.

That game was probably overlooked as it received relatively little fanfare and came out after Resident Evil 4, which made expectations for horror games very different.

Unfortunately, the game is rare, but those willing to hunt it down will find a chilling and tense experience.

Sometimes outside forces make a game fail. This time it was a scare. Rule of Roses was accused of being a game about sexually abusing and murdering children.

This scare happened in Europe, where newspapers sensationalized the game, resulted in a ban in many countries and a limited release in the US.

The game is nothing so severe, though themes of child abuse and cruelty are present. It’s never so gleefully cruel about it, but treats the material somberly and with weight.

The game is a tense, dark tale about a girl visiting an orphanage she used to live with and encountering cruel children who create a horrific, twisted fairy tale to escape daily life.

The game is very flawed. Combat is sticking, navigation is difficult, and the story is confusing. However, it excels at its atmosphere, making the game memorable.

To call Deadly Premonition inspired by Twin Peaks in an understatement. Developer Swery has had to insist he’s never seen the show.

The game is an open world story where you play a quirky federal agent investigating mysterious happenings in a small mountain town. Sound familiar?

What it lacks in originality, the game makes up for in atmosphere and a unique, disturbing experience.

Unlike most of these other games, it’s also readily available on Steam, the PS3, and the X-box 360.

What if Resident Evil was set in High School and was multiplayer? Then you get Obscure.

Obscure plays with a popular formula of the day with mechanics surrounding multiplayer gameplay and using light to ward off the evil infecting the school.

Fans of nineties horror films like Scream and The Faculty will find a lot to like, as the game deliberately adopts that aesthetic.

The game is unique mostly for its setting and for having some unique gimmicks. However, it does bring in enough flavor to satisfy horror fans.

It and its lesser sequel are both available on Steam.

One of Square’s most underrated games, it melds the at-the-time budding Survival Horror genre with the booming JRPG genre.

Coming from the initial idea to make Final Fantasy VII a detective story, the game stars New York detective Aya Brea as she uncovers an ancient conspiracy concerning the mitochondria.

Scientific dubiousness aside, the game provides plenty of spooky places and a very compelling story with likable characters throughout.

The gameplay is very influenced by JRPGs, featuring isolated combat, though it is in real-time and focuses on realistic guns rather than exotic weapons.

Many scenarios are dramatic, eerie, or incredibly cinematic. This game took lessons learned from Final Fantasy VII and pushed them to fascinating levels.

The game feels cinematic while not sacrificing what we love about games, and manages to marry both the survival horror and JRPG aesthetic without sacrificing either.

It had a less impressive sequel with Parasite Eve 2 and a universally reviled third game titled The Third Birthday, but you can’t go wrong with the first game.

And fortunately, it’s also available on the PSN. Copies of the original game are also pretty easy to find used.

Those who want a unique experience to their horror, or just want a JRPG with something darker than dragon quests will find quite a bit to like.