Stickman Rush – Break all traffic laws and get awarded for it

Stickman games have evolved over the years with fantastic fight scenes and effects added to each game. Some versions have 3D gameplay, although the controls can be a little confusing. In the case of Stickman Rush, the game landed like a bomb and blew fans’ minds right from the start.

The game is beautiful. The graphics of the game alone are enough to entice even the most Stickman-abhorring gamer in the world. However, the game is just an infinite scroller where you keep changing lanes to avoid obstacles, and this somewhat dampens the game.

A short sojourn down history lane

This is a game that was produced by people from differing worlds. Dubai Game developers EyeBox saw the Stickman illustrations on the website owned by Guillermo Kurkdjan, a French Illustrator and they approached him about collaborating to create a Stickman game.

The illustrator agreed and soon the Stickman series was born.

A simple, though exciting gameplay

You start out by controlling the main character Stickman, who is inside a small rocket ship. You will now start violating traffic laws and propel the rocket down a busy highway with three lanes, and keep changing lanes to avoid hitting passing traffic.

You just swipe up or down to change lanes and then swipe to the right to jump over obstacles. You collect coins as you go along, and sometimes have hairy near-collisions as you narrowly miss an obstacle or vehicle as you collect these coins.

The game as two iterations – Stickman 1 and 2

In Stickman Rush, the controls are the main issue that annoyed fans of this series. Some players even thought that there was a bug in the controls that need to be fixed. However, the problem was how the player interpreted the swiping action and how the developers intended it to be.

The game is displayed in an isometric aspect, which means that it is at an angle. When you want to change lanes, you are also tempted to swipe upwards or downwards, but at an angle. The game will interpret this as a jump. 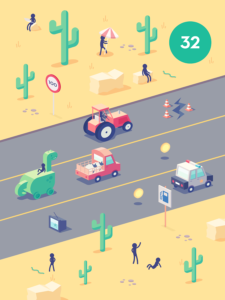 To play Stickman Rush correctly, it is necessary that you swipe precisely upwards on the screen to change lanes. Players finally got to condition their brains after a few tries and went on to have fun.

With the control issue somewhat resolved, Stickman Rush soon became monotonous with very little variety. The game is a little more than a pretty face with nothing more below the surface.

You can switch lanes and experience the adrenaline rush associated with speedy games; you get to jump over things now and then, but in the long run, you will soon tire of these repetitive actions. T

o tackle that; the developers decided to add extra vehicles, vehicles which you can unlock to get more coins, and even offer you free daily gifts for playing the game.

Stickman Rush is free to download and play, but it has in-app purchases which you have to make to turn off the adverts or buy extra coins. You can either watch an advert or continue with the game whenever you crash. This is a one-time offer since you can’t continue with gameplay indefinitely.

The annoying adverts have a way of getting in the way when playing the game. It is possible for the game to freeze as it loads an advert causing the player to crash. This is something that can put off many players, especially if one had a perfect run and had not crashed for a long while.

Stickman Rush may look like a one-time winner, but this is not the case. There has been a lot of fandoms built around the pastel designs by Guillermo, and this will play a significant role in creating the interest in what seems to be a minimalist game.

If you look at the series, you will notice that some of the games are in the traditional 2D design, but some of them now have a 3D design with a fully moveable camera.

The stories behind the Stickman series are usually those filled with a lot of action, and this is something that most gamers want. There will be a lot of talk about the prospects of this game, but the surface of possibilities has just been scratched.

A lot more lies deep within the Stickman games.

Experience the ultra realistic and heart thumping, high-speed action in Stickman Rush. There are two versions of the game, with several updates and improvements made in Stickman Rush 2. Choose from several different vehicles, each having different capabilities and speed.

You can even get vehicles that have Nitro propulsion for that extra push when you need it. The environment is a three lane highway, but the twists, turns, obstacles, and traffic make for an excitingly challenging game.

The game allows you to play with friends in tournaments to see who will make the most coins and get the highest score. Despite being a minimalist game, it has a lot to offer in the fun department.