Persona 5 Makes an Exciting Twist from the Norm in Gameplay

Persona 5 starts off at a fast pace as the protagonist finds himself in Tokyo after being transferred to “Shujin Academy”, as a probation sentence for a false assault charge.

During the day, he and his mates are normal students at the school, solving puzzles and performing other academic tasks. By night, they awake to their supernatural powers and use these to fight evils adults; the psychic manifestations are known as “Psyches”.

At night, they all become masked members of the “Phantom Thieves of Hearts” vigilante group and take turns battling their enemies in the labyrinths of Tokyo.

You get ranged weapons and negotiations, which have been left out for more than 10 years, making it even more exciting to play the game; you can remodel the weapons when you get to repair shops.

Persona 5 revolves around the harnessing of the Psyches of the Phantom Thieves of Hearts’ members, each of whom come from a different background and brings along different abilities to the game. The characters in this game do not necessarily come from shining backgrounds, and these are exposed to the game, but in a positive light. 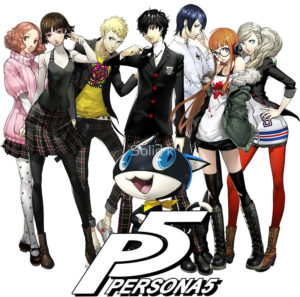 The “Palaces” where the fights take places are formed from the twisted desires of evil adults, and it is up to the group to fight and turn their hearts into good. Some locations are brought back from past iterations.

One such location is The Velvet Room – this was a metaphysical heaven which changed appearance depending on which character enters the room, and was originally a place to groom the character’s abilities; In Persona 5, the Velvet Room is a prison.

Here is a list of characters found in the game:

Persona 5 has significantly improved on the extent of the game compared to past iterations like Person 3 and 4. The palaces are much larger. In Persona 4, you would run through linear hallways till you get to the end; in Persona 5 there are hidden rooms, encrypted doorways, branching networks and journeys to parts found outside the dungeon itself.

Whenever you start a new dungeon, you are faced with challenging tasks, but through puzzle solving, you move on to a new area; this gives you a great sense of achievement.

Character interaction among the “Phantom Thieves” does not reach the levels of the “Scooby Gang” in Phantom 4. However, the design of the game allows the characters to rise at certain moments to save the day. The minutes look into the past lives of the characters from where they summon the strength to overcome the challenges the group is facing.

These past lives are most sensitive, with drug abuse, suicide attempts, abuse by teachers and other events coming to the fore. For example, an unrepentant drug dealer faces his past demons and overcomes them to show that he can be more than just a villain and help out the group.

In Persona 5, battles are turn-based, have both magic and melee attacks and use ranged weapons. You collect Personas which you use for battles; each Persona has certain strengths and weaknesses. Only the protagonist can hold multiple Personas. These can be fused into a new Persona with untold powers. There is a wide variety of enemies to fight in Persona 5. Complicated monsters to humanoids, you will have plenty of antagonists to conquer. You will also get to meet Jack Frost, an opponent who makes a return after 20 years of being left out of the game.

There is some voice acting, which makes it possible for you to negotiate during battles.

Persona 5 makes for a very immersive and enjoyable gameplay. The new changes give the game a new twist which is exciting for players used to the old design on versions 3 and 4. Go ahead and give the game a shot right away; see how far you can go within the new city of Tokyo.